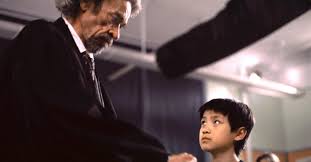 The Peanut Butter Solution might be the creepiest movie ever made. That it was intended as a family picture completely baffles me. Made in Canada, the film starts out well enough, following an adolescent, Michael, through school and family life. His father paints for a living. His mother takes care of something in Australia, and his sister seems to run the house in the meantime. The sister represents the first step in the creepy direction as she looks like she could be five or forty. I, of course, do not mean to be mean, and I am sure she grew up to be a lovely lady, but there is no way around the appearances of not just her but every actor in the picture. Maybe it’s the odd 70s adult film lighting but everybody looks weird. Moving on, the plot is set in motion when Michael decides to check out, with his Asian sidekick/friend Connie, a local house suspected of being haunted. Michael enters while Connie chickens out, and for his efforts, Michael loses every shred of hair on his head. Because he looks like a kid going through chemo, the movie quickly loses any sense of fun it might have had. It becomes uncomfortable. In crisis, the family and Connie rally around Michael to ease him through the ordeal. Eventually, two homeless-looking ghosts suggest a cure to Michael: rubbing peanut butter over his bald head. He complies, and what ensues is the stuff of wild fever dreams. Michael’s hair grows back, which is great, but it won’t stop growing. Pretty soon his hair stretches across entire blocks. Before the cure’s horror is fully revealed, the pre-pubescent Connie gets the bright idea that he would like pubic hair. He utilizes the peanut butter solution on his nether region, and his hair too stretches across entire blocks. Disturbing. Making matters worse is their art teacher, the Signor, who has his own personal sweatshop where he produces art brushes. He kidnaps kids including Michael to do his grunt work. At this point, Connie-sort of a poor man’s Short Round from Temple of Doom- becomes the film’s hero as he attempts to free all the exploited children.

I cannot say I enjoyed this film because I didn’t, but it did have an effect on me. With an abundance of creativity-even if misguided-The Peanut Butter Solution has proven memorable. Still, not sure who the audience for this PG-rated unintentional horror flick could be, I cannot recommend it. Unless you have a kid that you don’t like, I would not subject any child to this movie.