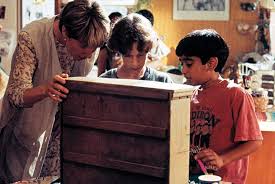 A nine-year-old boy finds the simple looking cupboard he received on his birthday has the ability to transform any toy into a live person (granted, in miniature form). He uses this power to bring to life Little Bear, once merely a toy Indian. Childhood favorites can be dubious, and so, I started The Indian and the Cupboard anxiously. It’s not terrible, but it’s also not very good. The wonderment I once associated with the titular magical cupboard has gone. Now, I simply watched cautiously waiting for embarrassing racial harmonizing moments. Thankfully, those moments didn’t come, and to the film’s credit, I did like much of what it had to say. It wasn’t overly sanitized. A late scene of Little Bear watching classic westerns and seeing the violence against his people portrayed was a standout. Overall, I wasn’t entertained or intrigued by the premise as I once was, but it’s basically a well-made picture with a handful of good thoughts.