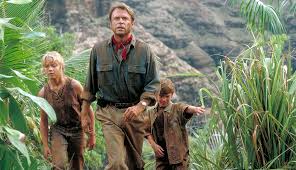 Once or twice a decade, a blockbuster will come out that blows everybody away. Spielberg made a handful of them. Jurassic Park, a film deeply entrenched in my childhood memories, remains for me, as an adult, a spectacular piece of entertainment. John Hammond (Attenborough), rivaling the notorious Dr. Frankenstein in audacity, defies nature and brings dinosaurs back from extinction. The purpose? Hammond, an entertainer, envisions a theme park based around these titanic, mysterious creatures. Investors, however, question the park’s practicality. They ask that Hammond get the endorsement of experts. Drs. Alan Grant (Neill) and Ellie Sattler (Dern), along with mathematician Ian Malcolm (Goldblum) are brought in to give their opinions.  Spielberg masterfully takes his time building up the suspense before delivering the thrills. Jurassic Park showcases his amazing abilities in complicated action sequences. It’s never just one thing. It’s not just the heroes and a T-rex. It’s the heroes, a T-rex, the rain, a car slipping in the mud, etc.