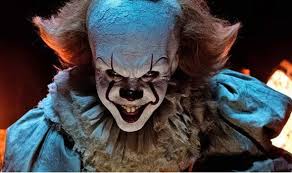 Big budgets don’t usually equal big scares for me. The most horrifying films, I mean the ones that truly frightened me, have largely been the low-budget, gritty, raw, thrillers set in the mold of Texas Chainsaw Massacre. Unnerving, punishing, with gory payoffs around the corner of every suspense scene, these kind of thrills aren’t for everybody. But It follows a different model. More Poltergeist than slasher pick, and it’s really more Goonies than anything else. It’s scary, but it’s more than that. It’s funny, nostalgic, and imaginative. It’s also a creditable big-budget spectacle.

Set in a town where children disappear at a rate well beyond the national average, we know, thanks to a vicious opening scene, that some sort of monster clown calling himself Pennywise (Skarsgård) is to blame. The film follows seven members of the “loser club,” a group of bullied junior high kids, at a time when kids are going missing left and right. Their leader, Bill, has a younger brother missing but hasn’t given up finding him. Beverley, the only girl in the group, is abused at home and deemed a slut at school. Mike is an orphaned black kid forced to work in a slaughterhouse. Ben is an overweight, sensitive new kid. Eddie’s a hypochondriac. Stan’s a nervous Jewish boy on the cusp of his bar mitzvah. And Richie’s a big-mouth incapable of taking anything very seriously. Together they try to solve the mystery of the missing children, with the majority of the film’s thrills coming from visions Pennywise visits upon the protagonists.

It, with its elusive title, and alternately nightmarish and illusory qualities, speaks on the nature of children’s imaginations. Pennywise is malleable and enigmatic, which is what the title suggests. “It” is whatever scares you. “It” is what haunts you in your sleep carrying over to your waking life. Like countless children’s adventures and Disney classics, the adults in this film are either M.I.A, completely useless, or worse, something sinister. It takes that dynamic to the extreme. The children are left completely on their own to triumph against evil. Adults can’t see Pennywise or his dark illusions. At no point do any adults do anything to aid the young heroes. This is a standard nightmare scenario.

But the film isn’t simply a dark drag as its predecessor (in the form of a miniseries) was. Set in the ’80s, the film mines a number of pop-culture references and clever banter between the leads to great effect. We grow to care about the characters, which makes the impending horror scenes that much more scary. The soundtrack is fantastic (adding more to the coming of age feel). The young cast is impressive, with the characters Richie and Eddie providing much of the laughs. It easily could have been the equivalent of a one-joke comedy. You have a nightmarish clown which is scary, but not in itself interesting.  When weaved into a story about friendship and fighting back against bullies, you have the excellent movie that is It.