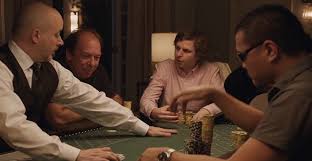 Exploring extraordinary figures is something of a hallmark of his. In the past, that’s meant real life enigmas-Steve Jobs, Mark Zuckerberg, Billy Bean- and created characters like President Bartlett as portrayed by Martin Sheen in the West Wing. Molly Blum, his newest protagonist, represents his first real foray into focusing on a strong female character. In the early 2000s, fresh out of undergrad and trying to make ends meet in L.A, Molly was recruited by a high-end club owner to help with a weekly night of underground poker.  Big name stars (allegedly DiCaprio, Tobey Maguire, Ben Affleck, A-Rod, etc.) showed up every week to bet six-figure dollars on games of poker, and all she was meant to do was look nice, serve drinks, and contact the people invited. Molly Blum was smart though, smart and bold, and soon she became the ringleader for the most high-profile poker games in the country, boasting A-list actors, sports heroes, and Wall Street whiz kids. Her rise to the top of the underground poker world is portrayed in rich, captivating detail, but, fitting in with another hallmark of Sorkin’s writing, so is her less action-packed upbringing. Sorkin strives to draw out the relatable and the everyday motivations behind his amazing characters. He’s helped tremendously by the performance of his star, Jessica Chastain. Her evolution from an ambitious, just trying-to-make-it college girl to Queen of high-stakes poker squaring off with mobsters is convincing, and she keeps a strong hold on our attention even as the mounds of money threaten to steal the spotlight. Idris Elba is also compelling as her defense lawyer after her way of living implodes, and the government takes all her earnings. Costner does a fine job as her overbearing, distant father, but, inevitably, the poker scenes (between watching all the money and trying to guess which celebrities they’re talking about in real life) are far more interesting.

Overall, it’s a solid picture, but for a film about such an amazing, larger than life story, it’s not very surprising.