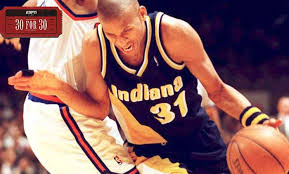 Another fascinating entry in ESPN’s running 30 for 30 series, this one follows the early to mid-’90s,  NBA rivalry between the Reggie Miller led Indiana Pacers and the Patrick Ewing led New York Knicks. The story is set with the retirement of Michael Jordan, who, with the Chicago Bulls, dominated the Eastern Conference as well as the rest of the NBA. With MJ gone, the rest of the league felt stronger than ever that their time was now, and the pressure was higher than ever. Two of the biggest contenders are chronicled in this funny and illuminating documentary, highlighting the teams’ similarities, Reggie Miller’s antagonistic persona, and Spike Lee’s passionate courtside fandom. The film is a lightweight compared to some of the other more substantial 30 for 30s, but it still demonstrates the power of sports, which I believe is the key to the series greatness. It answers the question of why we love sports.