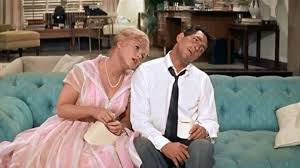 A small company called Susanswerphone acts as a telephone answering service for its customers (remember, this is before answering machines). One of its employees, Ella Peterson (Holliday), goes above and beyond, perhaps too far, by getting involved in the customers’ lives when she can tell by their messages that they need help. One especially desperate customer, a playwright named Jeffrey Moss (Martin), can’t seem to pull himself up off the mat after his partner ditches him. Ella sets out to help him and finds herself in love with him. Adapted from a stage musical, the film never actually tries to escape its stage trappings. That’s mostly fine since Minnelli is a master at stage design and mis-en-scene. More problematic is the lack of early dramatic tension, as, for me, the film only picked up in the second act once Holliday and Martin meet. This musical is best seen as a vehicle for Holliday’s enormous talent, and a super smooth Martin is always fun to watch. A couple of funny satirical elements also make an impression (there’s an actor molded after Brando and an amusing song about name dropping).