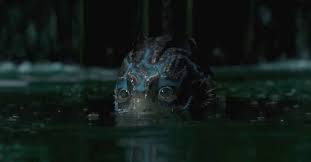 Mute cleaning lady, Elisa (Hawkins), works at a top-secret government lab. There, she meets and falls in love with the creature held under lock and key by sadistic Colonel, Richard Strickland (Shannon). What a strange love story? Del Toro pulls it off thanks to outstanding performances from the cast, and his unique and infectious love of all things strange and fantastic. There’s a standout dance/ dream sequence between the creature and Elisa that encapsulates all the film’s uncanny appeal. Shannon is truly terrifying as the psychotic Colonel, and there’s a scene late in the movie where he yanks off his own rotting finger that is unfortunately burned in my mind. This said, The Shape of Water is a superior monster movie, but falls short of being a masterpiece. Pan’s Labyrinth, which transcended its genre, remains Del Toro’s best.