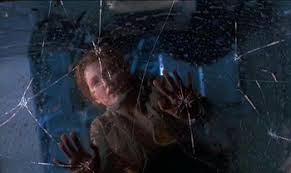 Jurassic Park is a classic and one of the biggest blockbuster movies of all time, directed by the biggest blockbuster director of all time. Naturally, they made a sequel. Naturally, it’s not as good. It’s bigger, louder, dumber. Surprisingly, it’s much better than I remember it being. For every dumb moment, there’s a genuinely thrilling sequence or jump-scare that gets me out of my seat. I’m not sure how many PG-13 films you can say that about. Dr. Ian Malcolm (Goldblum) returns, promoted to lead protagonist, to Jurassic Park, this time on a different island, in order to save his paleontologist girlfriend, Dr. Sarah Harding (Moore). Many people won’t enjoy The Lost World forgoing the original’s sense of wonder and adventure. This sequel is a horror flick. Lots of expendable characters making poor decisions (a “scientist” rolling out of a cave where he’s safe from the T-Rex because a snake touches him is so unbelievably silly), but the characters are strong enough and the buildup of tension is superb, so much so that I can forgive a weak third act in which the T-Rex ends up in San Diego in clear homage to Godzilla.