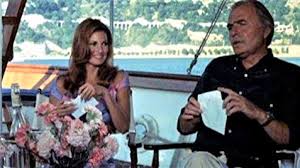 An incredibly clever murder mystery written by Stephen Sondheim and Anthony Perkins. James Coburn is Clinton Greene, a multi-millionaire whose wife was killed in an unsolved hit and run accident. Clinton has a real sadistic streak which shows when he invites 6 friends/suspects on his yacht for a weekend of fun and games. Everyone has a secret, nothing is as it seems, and it all comes together in the end. A superior whodunit; one of the best.