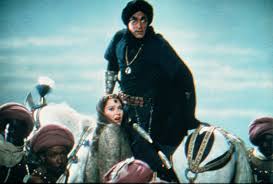 One of the great special effects films, Alexander Korda’s remake of The Thief of Bagdad (1924, starring Douglas Fairbanks) stars John Justin as the usurped Prince Ahmad and Conrad Veidt as the usurper, Jaffar. Tricked out of his throne and tossed in jail, Ahmad befriends the endlessly loyal, common street thief, Abu (Sabu), and the two escape to set out on high seas adventure. Once they arrive in a distant kingdom, Ahmad’s able to sneak a look at its nameless Princess (Duprez), a woman so beautiful, her father endeavors to keep her hidden, out of sight from men. Determined to be with her, Ahmad finds that she’s promised to his mortal enemy, Jaffar, and plans for love and revenge blend together. This film is one inspired sequence after another; a series of spectacular, ingenious special effects. Special effects age, but the creativity and Technicolor lavishness endure. I find the old-fashioned special effects mixed with the wonderfully corny overtures of romance give the film an appealing dreamlike quality. The Thief of Bagdad is also unforgettably strange at times; the incredible many-armed dancing statue scene for example. Not top-billed, Sabu, eventually, and to our pleasure, becomes the hero of the story.