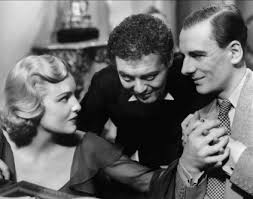 Alfred Hitchcock did several versions of this story throughout his career. An ordinary man thrust into action and adventure. In Secret Agent, based upon a novel by W. Somerset Maugham, Captain Brodie (a rare early screen appearance from Theater legend Gielgud) returns home from World War 1 to find himself considered dead. A mysterious gentleman known as “R” recruits him for a top secret mission to eliminate a German agent hiding out in Switzerland, with the help of a rogue known as “the Hairless General (Lorre)” and a beautiful blond named Elsa (Carroll) pretending to be his wife. It’s an intriguing setup and offers Hitchcock a number of opportunities for great suspense and misdirection. He executed this story better with the earlier classic The 39 Steps, and later with North by Northwest, but Secret Agent is very good for most of its run time. Its failure is its finish, ending poorly with a rather silly wrap-up that’s neither believable nor exciting. A shame since the build-up to that point is terrific.