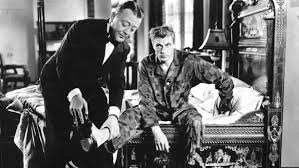 That Gary Cooper, a million leagues away from actually being an “everyman,” could so effortlessly and movingly play one in this film deserves much applause. He plays Longfellow Deeds, a noble average Joe, who inherits a massive fortune from a distant relative. Jean Arthur, one of my favorite movie stars, plays Babe Bennett, a cynical reporter out to get the big scoop, on Deeds. She, of course, begins to fall for him. Douglas Dumbrille plays John Cedar, a greedy lawyer, posing as Deeds’ financial advisor. A true classic. One of Capra’s greats and he made several.