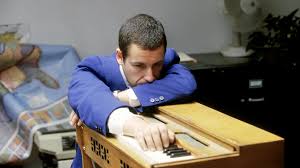 An implosive and lonely bathroom supply salesman, Barry (Sandler), constantly bullied by his seven sisters, finds love when he meets one of those sister’s coworker, Lena (Watson). It’s probably too strange for the mainstream, and some might find its peculiar soundtrack grating, but this is a great movie. The movement, that soundtrack, and the suspense of watching an always on-edge Sandler give the film a sense of energy and a tone sustained to the end. I think it’s the best depiction of the anxiety and desperation that can sometimes come with love.