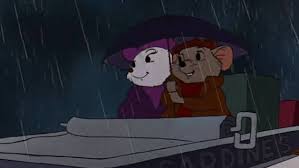 When the elegant mouse, Ms. Bianca (Gabor), volunteers for a rescue mission, she chooses bashful janitor, Bernard (Newhart), as her partner. The mission: to save a little orphan girl who’s been kidnapped by an evil treasure hunter, Madame Medusa (Page). Medusa uses the girl to crawl into a dangerous cave where a priceless treasure is hidden. The lone hit for Disney during their 1970s, post-Walt Disney’s death period, The Rescuers makes for a wonderful adventure. Lays on the pathos rather thick, but it works, and Madame Medusa is a fantastically vile villain. Bernard and Ms. Bianca are a suitably romantic and heroic pair, thanks to the voice work of Newhart and Gabor. It’s a fast-paced, efficient film, not as substantial as Disney’s early classics or their ’90s output, but a very good film nonetheless.