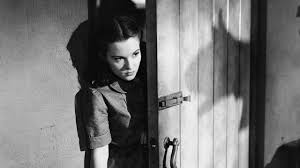 Jerry (O’Keefe), a promoter, gets a leopard to bolster his girlfriend’s act, but when it gets loose and women are killed, Jerry’s not sure if he’s after a rogue leopard or a human killer. A fairly obvious mystery plot with a running time of 66 minutes and no character development, the film is reduced to a series of drawn-out suspense sequences, with three, in particular, standing out. A terrifying scene in a graveyard, blood pouring in under the door, and the character, Margo’s cigarette lighting up the dark alley. Three great scenes are enough to recommend any movie, and the amount of creativity and inventiveness that transformed a shoe-string budget into a memorable horror classic is staggering.