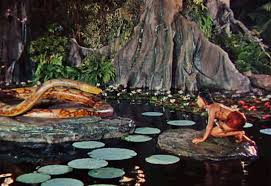 Though made in Hollywood during the war years, this production of Rudyard Kipling’s classic feels very British. Former servant turned star, Sabu, gives his greatest star turn as Mowgli, a boy raised by wolves and coerced into leading a group of greedy men to a lost treasure. This version was filmed in a studio, but the incredible set design and live animals more than make up for the artificial surroundings. It’s a fantasy, but also a strong morality play. Among the best works produced under the Korda brothers.