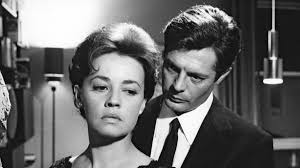 La Notte, Antonioni’s mood piece, seems influenced as much by jazz music as by any film that came before it. The plot, if one exists, is irrelevant. The dialogue is almost exclusively small talk and the characters, specifically, the two leads, unhappily married couple, Lidia (Moreau) and Giovanni (Mastroianni), seem to consistently circumvent what it is they mean to say. Their story is told over the course of a night, beginning with a visit to a dying friend, and ending with a dubious reconciliation, and dubious reconciliation is actually my optimistic reading. A more negative view of the finale in which husband and wife talk, at last, would be to note that the wife is attempting to speak honestly and the husband is in denial. You could say that his kissing her in the end, rather than being romantic, is him willfully ignoring her. The entire film drifts through, a beautiful malaise. I look forward to revisiting La Notte at some point down the line.