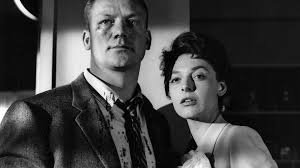 Average Joe James Vanning (Ray) might know where some money is hidden; money stolen from a bank. An insurance investigator, Ben Fraser’s (Gregory), been following him for months now, and things escalate when two men from Vanning’s past catch up to him-the two men who actually robbed the bank, John (Keith) and Red (Bond). Anne Bancroft plays the femme fatale turned angel who takes it on the lam with Vanning. This is a terrific film. The plot, structure, characterizations, acting are all first-rate in what I think was considered a B-film. Aldo Ray, who I was previously unfamiliar with, has a very easy going demeanor that belies the situations he’s put in throughout this film, and it doesn’t seem forced. He’s a natural. The villains-the two criminals on Vanning’s tale-are excellent; cold-blooded and menacing, sadistic at times. At roughly 80 minutes, Nightfall is a masterclass on economy of time and gripping from start to finish.