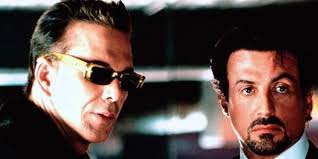 The original Get Carter is a classic British gangster film: raw, relentless, bleak, and brutal. Michael Caine starred as Jack Carter, a gangster out for revenge on his brother’s murderers. As portrayed by Caine, Carter was nearly as ruthless as the “bad guys,” cold and methodical. Stallone’s Carter is a big softy. That’s not to criticize his performance. Stallone is quite good in this role, but the filmmakers or writers or whoever decided to water down the material. It’s as if Get Carter was remade by people who didn’t even like the original. Instead of raw, gritty filmmaking, we get polished, overly-stylized filming here, and instead of a morally ambiguous hero, we get a righteous mob enforcer. Maybe if they had just called it a different name, severed its ties to the original, this film might have had a chance. We know that Stallone is very compelling in these roles, but this Get Carter is wildly inferior.