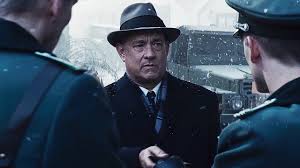 Sophisticated, if somewhat glossy spy thriller starring Tom Hanks in classic good guy form as a lawyer who must defend a known Russian spy during the height of the Cold War. Mark Rylance plays the Russian spy and his deadpan demeanor gradually becomes endearing. The second act of the film where Hanks goes to East Germany to broker a deal is phenomenal, while the rest of the film is a little too sentimental.