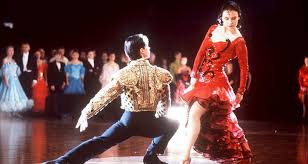 Aussie dance flick from the director of Moulin Rouge (2001), this flamboyant musical follows Scott Hastings (Mercurio) as he goes for Gold in the form of the Pan-Pacific Grand Prix dance competition. His longtime dance partner and girlfriend has left him, leaving him to team up with the shy, frumpy Fran (Morice) in order to achieve his dream. It’s a very fun film. The music and dancing are great and, the hyperkinetic style of editing, which is initially jarring, settles in eventually.