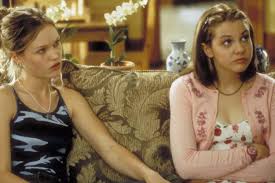 Bianca Stratford (Oleynik) is one of the most popular girls at Padua High School, but she has an over-protective father (Miller). He instates a rule that Bianca is not allowed to date until her older, shrewish sister, Kat (Stiles), dates too. Bianca sees that as a life sentence, but the new boy in school, Cameron (Gordon-Levitt), smitten with her, comes up with a plan: hire the “bad boy” of the school, Patrick (Ledger), to romance Kat. Not surprisingly, over the course of his assignment, Patrick begins to have real feelings for her. Somewhat derivative of the fabulous Clueless (based on a Jane Austen novel), 10 Things I Hate About You still feels remarkably fresh, perhaps thanks to its talented cast of, then, up-and-comers. Its madcap style offers a joke every minute, and though some don’t land, they keep the pace fast, and the story, adapted from Shakespeare’s The Taming of the Shrew, is still fun in its updated setting.