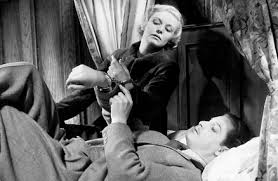 Classic Hitchcock thriller about a man (Donat), a victim of chance, who gets wrapped up in international espionage and a conspiracy plot. A couple of romantic subplots spice up the proceedings. One with Margaret (Ashcroft), a bereaved Scottish wife who helps him elude police, and the second with Pamela (Carroll), an uptight, unhelpful British blonde who, of course, turns out to be the love of his life. Stylish and efficient (the film’s only about 80 minutes or so), this is one of Hitchcock’s most entertaining movies, which is to say one of the most entertaining movies period.