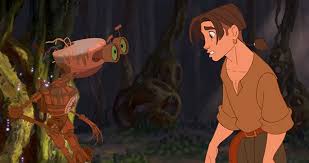 Robert Louis Stevenson’s classic adventure novel, Treasure Island, is adapted and animated for the big screen with a unique twist: instead of the 18th century pirate-infested high seas as its setting, Treasure Planet relocates the oft-told story to the wide-open space of some far off galaxy. The move doesn’t really make sense logically (like why would they be flying pirate ships in space?) and Treasure Planet lacks the broad appeal of Disney films like The Lion King or Aladdin, which resulted in it bombing at the box-office and putting 2-D animation on life support. It’s not a bad movie despite this, however. It’s actually a compelling narrative (naturally, given its source) with well-drawn characters, excellent voice acting, stunning visuals, and several exciting sequences. It’s unfairly marginalized and due for reappraising.