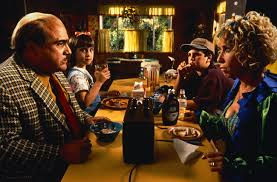 Six-year-old Matilda Wormwood (Wilson) is a very special girl.  From birth, she’s demonstrated enormous intelligence, only no one in her family pays her any attention. Things look to get better with her starting kindergarten, but the school she’s going to, Crunchem Hall, is run with an iron fist by the diabolical principle, Ms. Trunchbull (played superbly by Pam Ferris). Her punishment for a kid who ate her cake is memorably cruel and grotesque. The only source of light at the school is Ms. Honey (played with perfect sweetness by Embeth Davidtz), Matilda’s teacher. Matilda soon discovers her telepathic abilities and uses them to pay back all of the adults who’ve mistreated her ( basically her father and Ms. Trunchbull). An entertaining, darkly humorous family film with a tremendous cast led by child actress Mara Wilson and director/star Danny Devito, Matilda is a children’s classic-both book and adaptation.