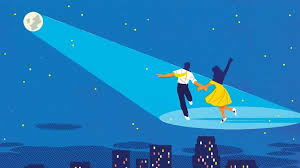 Whimsical musical about a man and a woman out to make it in Los Angeles. Gosling wants to be a great jazz pianist but finds it increasingly tempting to sell out to modern smooth jazz, while Stone wants to be a Hollywood actress but can’t seem to get beyond hello at auditions. The two fall in love and the film plays out in grand fashion; incredible camera flourishes and spectacular set pieces. La La Land, more in the style of the great French musical Umbrellas of Cherbourg than a classic MGM musical,  is a superb reminder of past classics and how great the musical genre can be, but it falls short of greatness itself. Ultimately, its performers, suited as they are to the style La La Land is going for, can’t match the prowess of, say, Astaire or Gene Kelly or Judy Garland, and for me, a long time fan of musicals, that’s a shortcoming.