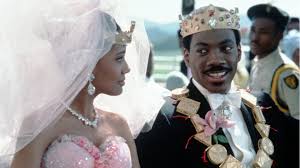 An African prince, Akeem (Murphy), feels that he’s missing out on much of life, sitting up high in his royal castle. With his arranged marriage looming, time is not on his side. He convinces his father, the king (Earl Jones), to let him travel to America with his servant and friend Simi (Hall), where he secretly hopes to find a wife. Romantic comedy conventions firmly in place, Murphy and Hall are free to be creative in other aspects of the film. For example, the half dozen hilarious characters each of them play. Director, John Landis, lets both actors go, and it’s the irreverent scenes like the barber shop talks or the quick round of dates at a nightclub that make Coming to America a classic. Eddie Murphy also shows himself to be very charming and charismatic as a romantic lead in this movie.