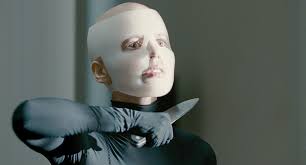 Wow. I was determined to jump ahead of this film’s twists, and yet, I still found myself stunned and elated at its slowly unraveling plot. Beginning with Antonio Banderas as a renegade surgeon reeling from his wife’s death and Elena Anaya as his special patient/prisoner, the film jumps back and forth in time oozing sinister undertones and tossing out red herrings until the big moments that left me floored and unnerved. All the actors are quite good in Almodovar’s slightly campy, melodramatic manner, and the director once again proves to be a master at blending tones and styles.