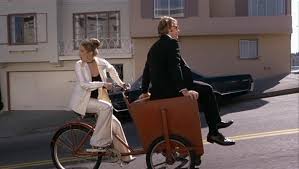 A ’70s update of the classic screwball genre stars Ryan O’Neal as a professor on an important trip which can determine whether or not he receives a grant. The biggest obstacle for him: Barbara Streisand. As the screwball heroine, she’s a relentless source of trouble for O’Neal whom she instantly falls in love with; of course, she’s also a source of joy which he comes to understand eventually. The plot is as intricate as any I’ve seen or read, involving identical luggage, government secrets, jewel theft. It’s a fun excuse for a madcap movie. The writers, director, and stars have the style down pact. My quibble is that it’s almost too fast. There’s no chance to breathe. Some of the big sequences weren’t as compelling as a simple scene in the middle of Streisand and O’Neal falling in love by a piano.