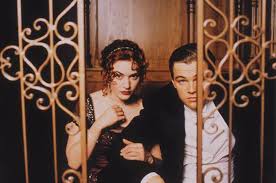 Rich girl, poor boy fall in love aboard the RMS Titanic in the days leading up to its legendary and tragic plunge. I think we’re all familiar with the story of Jack (DiCaprio) and Rose (Winslet) at this point. Titanic is great entertainment. It’s engrossing drama, sappy but compelling romance, and finally a stirring disaster epic. I was most interested in the latter element, or the second half of the film, in other words. Through it all, Cameron’s skill and technical ability are on display and the level of craftsmanship in this film is astounding. I did find myself, upon recent viewing, to be a little more cynical and bemused by the antics of the protagonists. Why throw a priceless necklace to the bottom of the ocean? That could feed thousands of people.