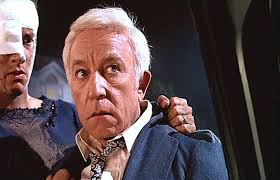 Ray Peterson (Hanks), husband, father, suburbanite, wants to relax, or more accurately, his wife (Fisher) wants him to relax. He wants to find out what’s up with his weird new neighbors, the Klopeks. They dig holes at night, throw large bags into trash cans, and never say anything to anybody. Ray’s not the only one who’s curious. His friend and neighbor, Art (Ducommun), doesn’t hesitate to believe something’s up with them. Neither does Ray’s retired military neighbor, Lt. Rumsfeld (Dern). They investigate while their wives roll their eyes and try to talk them down. It’s pretty obvious territory for satire. Director Joe Dante’s made several films lampooning the suburbs, mixing horror with looney tunes humor. He’s quite good at it, with his Gremlins films being his best. This is an often funny, mostly aimless comedy light on the thrills. The jokes and characters are there, but the filmmakers skimped on the horror. Henry Gibson and Brother Theodore make up for some of this by being so amusingly creepy, and Hanks is a joy in pretty much anything. He’s way over the top here, but it suits the material.