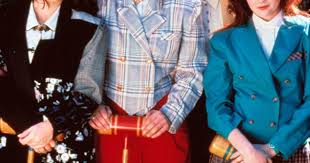 “Did you have a brain tumor for breakfast?” So says Heather 1/ Head Heather/ Heather Chandler. There are three Heathers, plus a Veronica (played by Ryder), making up the most popular clique at Westerburg High School, but lately, Veronica’s been disillusioned by her friends. In fact, she doesn’t even like them, and wonders why she spends all her time with these girls. Then she meets the weird new boy in school, J.D (Slater), and falls for him. He gets her to help teach the abusers at school a lesson, starting with Heather Chandler. This is a pitch-black satire. I appreciate the edge, the wicked dialogue, and free-wheeling script. However, I didn’t buy Slater in his menacing role, and I feel the third act loses steam because of it. Ultimately more quotable than enjoyable.