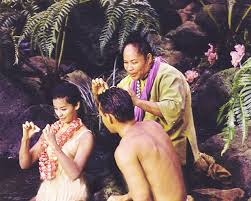 On an island in the South Pacific during World War II, a cast of characters that includes Nurse Forbush (Gaynor), Navy Lieutenant Cable (Kerr), and French plantation owner Emile de Becque find love, friendship, and combat set to Rodgers and Hammerstein’s memorable music. South Pacific has noble ideas-ideas about racism and prejudice-and goes about them earnestly. Naturally then, it’s quite corny and old-fashioned. It’s also not as involving a story as, say, The King and I or The Sound of Music, two of the musical team’s most popular works. In the end, however, it was just involving enough to get me from one catchy song to the next, and the picturesque setting makes South Pacific a beautiful Technicolor film.