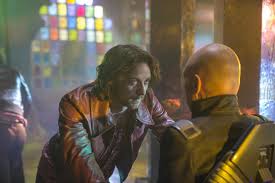 A fresh spin on the X-Men universe, Days of Future Past imagines an apocalyptic future decimated by machines known as Sentinels. Designed by a Dr. Bolvar Trask (Dinklage) in the early 1970s, the X-Men along with Magneto team up on a plan that could change everything. With Kitty’s new found power, they can send Logan (Jackman), the only mutant capable of surviving the trip, back in time to alter the past and save the future, but he’ll need the help of a young Dr. Xavier (McAvoy), weakened by drugs, and a young Magneto (Fassbender), untrustworthy and incarcerated. After Logan (2017), this is the second best X-Men film and the best one that features all of the characters. It’s a great concept executed sublimely with much humor and suspense. How many superhero films can you say that you didn’t know how it was going to end?