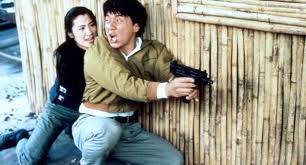 Jackie Chan returns as Chan Ka-Kui, a talented cop always ready for action. Here, he teams up with Interpol Inspector Hana (Yeoh), in an effort to infiltrate a powerful drug lord named Chaibat’s operation, and put him behind bars. This involves Chan breaking Chaibat’s brother out of prison in order to gain his trust, and later he and Inspector Hana are hired as Chaibat’s muscle. Slightly more serious in tone than some of Chan’s other work, there’s still plenty of room for comic misunderstandings and physical humor, but mainly this fantastic action flick comes down to its stunts. Chan and Yeoh are tremendous. The final twenty minutes is one jaw-dropping stunt after another including Yeoh barely holding on to a bus on the fritz, or driving a motorcycle up a hill and onto a moving train, or Chan falling from a helicopter onto a train’s compartment full of porcupines. The trademark end reel wherein all the goofs are shown only highlights how dangerous the work was and how incredible it is that they pulled it off.