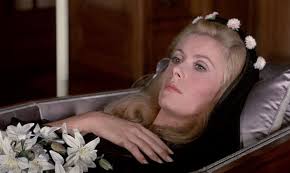 A satirical, almost whimsical tale about a bored young housewife, Severine (Deneuve), with seemingly everything, who becomes a high-end call-girl during the day time. Later, she meets and is oddly attracted to a local thug named Marcel (Clementi), whose obsession with her puts her duplicitous life in danger. A lurid, fascinating film by Luis Bunuel, considered one of world cinema’s old masters, Belle de Jour is one of the few he did that I’ve embraced. It’s regarded as a commentary on a woman’s fantasy life, but, as it’s written and directed by men, I think it has more to do with men’s fantasies about women. Deneuve’s Belle de Jour, as she is later called, is part classy, elegant lady, part prostitute. A feminine version of Venus in Furs’ Severin. In any case, the sordid story is handled with expert control and exuberant style.