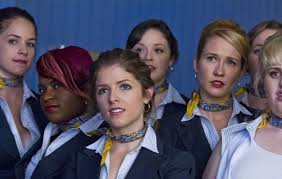 Freshman Beca (Kendrick), forced to go to college, forced to get involved with some club or sorority, reluctantly settles for the Barden Bellas, an all-girls acapella group. In past years, the Bellas have focused on Barbie-doll looks and clothes. Mere months removed from one of its girls, Aubrey (Camp), now the leader, throwing up during a live performance, the Bellas are happy to take who they can get, and so they compete and clash among themselves to become the first all-girl group to win Nationals. This was a fun, surprising, fresh comedy when it first hit theaters, and though two sequels and time dull some of its freshness, Pitch Perfect is still a lot of fun. The characters are nicely drawn, the music is exciting, and the oddball humor works.