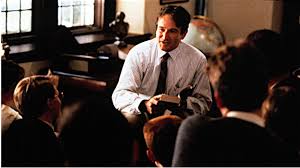 A young, individualistic teacher, Mr. Keating (Williams), begins working at the prestigious Welton Academy, in Autumn 1959. He quickly excites and inspires his students, chiefly Todd (Hawke), Knox (Charles), Charlie (Hansen), and Neil (Sean Leonard), along with a few others, who make up the illicit club known as the Dead Poet’s Society, a group that meets in secret to share and recite poetry. Not generally the least bit moved by films that get deemed “prestigious” or “inspiring,” I’m surprised that Dead Poet’s Society makes such an impression, to this day. Roger Ebert’s disdainful review with lines like “a collection of pious platitudes” would seem fair except watching the film again, I think it misses the point. Dead Poet’s Society, heavy dramatics aside, is about being inspired or having someone that inspires you. As for the platitudes, since the main characters are all teenagers and only just figuring out who they are and how to express themselves, I think they can be forgiven for any number of platitudes. It’s an involving and rousing drama, with a memorable performance from Robin Williams.