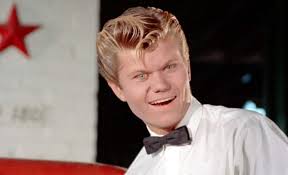 “The Nephilim (giants) were in the earth in those days,” the narrator tells us, quoting the bible. From that line, meant to lend the film austerity, perhaps gravitas, we get Eegah, a sixties rock and roll picture with a giant caveman named Eegah (Kiel) running through it. Roxy Miller (Manning) discovers the prehistoric man driving idly one summer day. He doesn’t hurt her, and when she returns to town to tell her neighbors, they assume she’s crazy. Her father and lame-brained boyfriend (Arch Hall Sr. and Jr.) take her seriously enough to investigate. What ensues is basically a really pale version of King Kong. Eegah, so named because it’s the only thing he says, seems to care for Roxy, although unlike King Kong’s surprising tenderness, Eegah’s infatuation seems awfully assaultive. The technical aspects of this film are terrible. Sound and visuals conspire to make Eegah an all-time terrible movie. The soundtrack is emblematic of the film as a whole: so bad it’s good. My question throughout was where was Eegah for the thousand years in between his era and the time the main characters’ found him? No one else in all that time ever saw him? It’s not like he was frozen in a block of ice. He was barely even hiding. One of life’s unanswerable questions, I suppose.