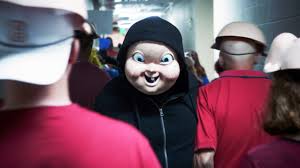 Early on, there’s a scene where the three returning protagonists-Tree (Rothe), Carter (Broussard), Ryan (Vu)-go to a science lab to search for a demented serial killer. Carter leads the way with a baseball bat. The other two go empty-handed. Looking for a killer is one thing, but going empty-handed is too much. I’m resisting the urge to scream, “Grab a weapon!” at the screen. Then, almost a slasher film miracle. Ryan grabs a mop handle, and I think, “this might be a superior slasher film with characters that make decent decisions.” Sadly, no. Another scene, not long after, Ryan, in the middle of a crowd of people, runs from his masked pursuer to hide in an empty room with no witnesses and no one to help him should the killer find him. Thankfully, Happy Death Day 2U is barely a slasher film. A sequel, this film continues with the time loop conceit (borrowed from Groundhog Day) but takes it to some fun, surprising, adventurous places. Still silly, still tame, and the whodunnit element proves fairly uninteresting, Happy Death Day 2U works more as a young adult adventure flick.