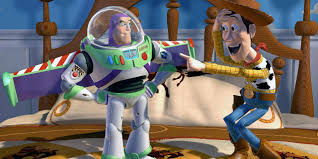 What if when kids aren’t looking, their toys come alive? That’s the central idea behind the adventures of Woody the cowboy and Buzz Lightyear. Woody (Hanks), his owner Andy’s favorite toy, feels insecure and jealous when the newest, coolest toy on the block, Buzz Lightyear (Allen), arrives on the scene to steal most of the attention. What could easily have been a one-note conceit, thanks to superior writing, spirited voice acting, and imagination, has become a perennial classic. You relate to Woody’s anxiety, and his contentious friendship with Buzz is one of the most endearing in film history. The Randy Newman songs are unforgettable. If the visuals show some wear, we overlook them, because the story is as engrossing as ever, and it is still one of the funniest animated films.