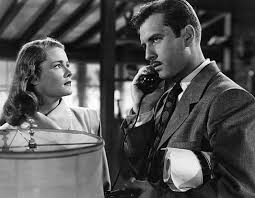 Iconic detective of film and literature, Phillip Marlowe (portrayed unconvincingly by Montgomery) is on a case chasing down a rare 18th-century coin known as the Brasher Doubloon but finds it to be more complex than it at first appeared. It’s not long before he stumbles onto an unsolved murder, blackmail, and corruption. All private eye fiction is indebted to Dashiell Hammett’s The Maltese Falcon in some way or other, but I don’t recall Raymond Chandler’s novel, The High Window (the book in which this film is adapted from) being as derivative as The Brasher Doubloon feels. You have a handful of people searching for and ready to kill for a priceless antique item. That’s The Maltese Falcon all over again. The Brasher Doubloon also opens with a scene that’s heavily reminiscent of Howard Hawk’s The Big Sleep which came out just two years earlier. The supporting players and the leading lady are better suited to their roles than the lead, and The Brasher Doubloon isn’t a very good title for a film. The filmmakers would have been better off sticking with The High Window. Unoriginality aside, this is a decent film, and all private detective movies are entertaining.