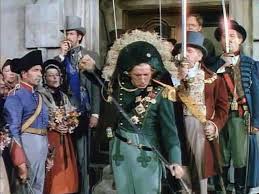 A Gypsy clown, Georgi (Kaye), is mistaken for a high-ranking public official in a corrupt town in an unclear 19th-century European country. Having to keep up the charade or face execution, all while fending off the mayor’s wife (Lanchester) and resisting his feelings for the servant girl Leza (Bates), Georgi’s adventures should be much more entertaining and suspenseful. This film misses the satire of Gogol’s play and squanders the intrigue. It’s too preoccupied with the comedy. The best Danny Kaye films rein him in a bit and allow his talent to service the plot rather than the other way around. The Inspector General is a decent picture but had the potential to be more.