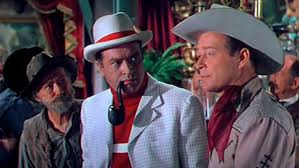 A loose sequel to The Paleface (1948), Bob Hope and Jane Russell return in new roles, once again facing off against the Indians (played by white people), outlaws, and ravenous townspeople who have been cheated out of money by Hope’s father. Like all Hope films that I’ve seen, there is a lot of witty one-liners, clever use of the fourth wall, and self-deprecating humor. Standing out from some of his others though, this film has some truly incredible stunts that rank among the best and most creative put on screen.