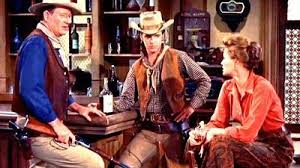 After arresting a wealthy and corrupt man’s brother, Sheriff John T. Chance (Wayne) must hold his small town prison off from a horde of deadly mercenaries. The only help he has are his two deputies, the self-destructive Dude (Martin), and the lame Stumpy (Brennan). Classic western, one of the last and best of the old Hollywood style, coming right before the genre would be redefined by Italians and Sam Pechinpah. Centered more on characters and dialogue than most westerns, Rio Bravo is a terrific entertainment, kind of a boy’s fantasy. Hanging out with friends. Facing off against villains. Romancing a beautiful woman. Great stuff.