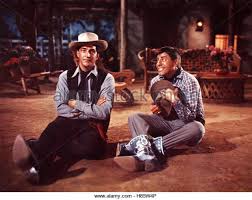 In order to save their ranch, Slim and Wade Jr. (Martin and Lewis) take on a violent gang known as the masked raiders, over twenty years after their fathers were murdered by that same gang. A lesser Martin and Lewis pairing, while still showcasing an abundance of style, that lacks wit and any memorable musical numbers. Lewis’ screen time dwarfs Martin’s, and I don’t consider that a positive. There’s also no romance to speak of, despite there being two romantic interests. Too much Lewis, not enough Martin.