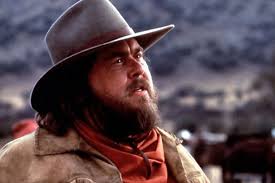 Finding the old west to be not all as advertised, a group of 19th-century settlers hire a drunken wagon master, James Harlow (Candy), to lead them back east. Perhaps unfairly derided as an epic travesty and Blazing Saddles wannabe, Wagons East is bad but not as bad as its 0% on Rotten Tomatoes would suggest. This is a watchable film, with a solid, if undemanding performance from Candy in his last film. If you want to pretend that his last film was Cool Runnings instead, I understand. That being said, I did laugh one or two times, and the premise could have yielded better results with a better filmmaker. The main problem is too many lame, lazy jokes involving gay stereotypes and lowest common denominator humor.