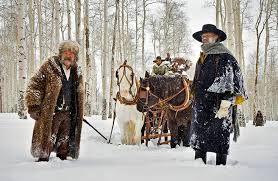 Shacked up in a remote lodge, snowed in by the blistering Wyoming conditions, bounty hunter John “The Hangman” Ruth (Russell) reluctantly requests the help of a fellow bounty hunter, Major Marquis Warren (Jackson). Ruth is carrying precious cargo, Daisy Domergue (Leigh), with a massive bounty on her head, and while the reward states dead or alive, Ruth insists on seeing her hanged (meaning taking her in alive). Ruth senses something’s afoot at the lodge as he looks at the fellow guests: there’s the weaselly Sheriff Mannix (Goggins), fork-tongued Oswaldo Mobray (Roth), the quiet Joe Gage (Madsen), notorious Confederate General Smithers (Dern), and shifty Mexican Bob (Bichir). Ruth believes that one of them, maybe more than one, maybe all of them, are working to free Daisy, and so he recruits Warren, the only one he basically trusts. What follows is a trademark Tarantino extravaganza: killer dialogue, wild tonal shifts, extreme violence, and a gallery of unforgettable characters. Race is a major issue, and many critics complained about how it is used in this film for provocation rather than enlightenment or insight. I see it as a continuation of Tarantino’s recent films that were grounded in wish fulfillment. Here, the black guy, Warren, is the smartest guy in the room. As the murder mystery unfolds, we watch him unravel the deception and conspiracy through intelligence and deception of his own. There’s a shocking (to some) scene in the middle of the picture exemplifying this where Warren uses a story I believe to be fictional simply to elicit a dumb response from an enemy so that he can dispose of him. Some characters work better than others. Mobray and Bob aren’t given much to do, and Gage, while being a textbook western character, seems boring next to the outlandish surrounding cast. There’s also an odd cameo that I’m unsure of. However, Jackson, Russell, Jason Leigh and Goggins are outstanding, and the setting, as filmed by Robert Richardson, is glorious.