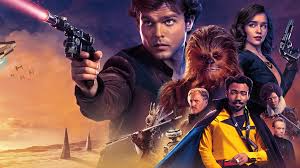 Staying true to their word of a new Star Wars movie a year, Disney gives us Solo, an origin story for the iconic character first played by Harrison Ford. He’s played here by Alden Ehrenreich, a good actor, and a fine Han Solo, despite not looking very much like Ford. His story follows his humble beginnings on Orellia, where an orphaned Han and his girlfriend, Qi’ra (Clarke) struggle to survive at the mercy of a local crime syndicate. It all seems very Charles Dickens-esque or Dickensian if you will, which could have made an interesting film by itself, however, we light-speed past this part of his life, and pick up years later when through a series of events, Han meets a gallery of thieves and decides to join them, along with his new pal, Chewbacca. The mission details hardly matter (and perhaps that’s the film’s main fault). All that matters is that the stakes are high, it’s going to be extremely difficult, and there will be a ton of action. The film delivers on all of the basics of popular entertainment: action, great special effects, romance, mystery. In the end, though, it feels too much like the B-Side to a great album. I haven’t been overly impressed with the Star Wars spin-offs. You lose the element of surprise since we know where Han is going, but I did find Han and Chewie’s budding friendship worth the watch.